It passes through the solar system at approximately 1.6 million kilometers per hour, hitting everything in its path. It is the solar wind, a stream of charged particles of electrons, protons, and alpha particles, released from the Sun’s upper atmosphere, called the sun’s corona. A plasma of energy that moves at an amazing speed.

And thanks to the Parker Solar Probe mission we now have a sample of the sound of this energy.

An instrument on board NASA’s Parker Solar Probe mission can “hear” the interaction of the waves and particles that make up the solar wind: through the roar of the wind, we can hear the small squeaks and whispers that hint at the origin of this wind.

In the following video from the Aplied Physics Laboratory (APL) of the Johns Hopkins University you can hear a little bit of the melody offered by this solar wind:

This NASA mission in the vicinity of the Sun can “listen” when waves and particles interact with each other, recording frequency and amplitude information about these plasma waves that scientists can now reproduce as sound waves.

NASA’s Parker Solar Probe mission took off in August 2018 towards the Sun. In November of that same year and in April 2019 it made two approaches to our star, approaching some 24 million kilometres (less than half the distance at which Mercury orbits the Sun). 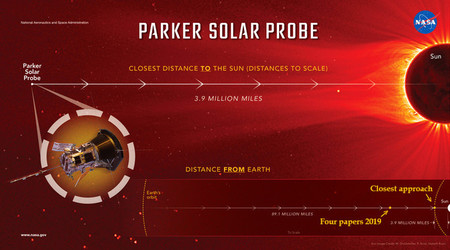 Jack Dorsey asks Elon Musk how to fix Twitter and his solution points to...

mediabloid - January 18, 2020 1
Jack Dorsey often think about the Twitter future, it is part of his role as the head of the platform, and although he refuses...

mediabloid - March 18, 2020 1
The world is largely in quarantine thanks to the now infamous Coronavirus made in China, which is forcing people of all ages to stay...

This week in the Apple Arcade: ‘Kings of the Castle’, a game in which...

mediabloid - January 19, 2020 0
To get more out of your weekend, Today at Applesfera we will share the announced news for Apple Arcade. Last week, first, the company has released...

mediabloid - January 23, 2020 0
For the end of this year, the Xbox Series X, the most powerful and ambitious console of Microsoft until date will undoubtedly have a...

The Mission Parker Solar Probe sends us audio with the sound of the solar...

mediabloid - January 18, 2020 0
It passes through the solar system at approximately 1.6 million kilometers per hour, hitting everything in its path. It is the solar wind, a...